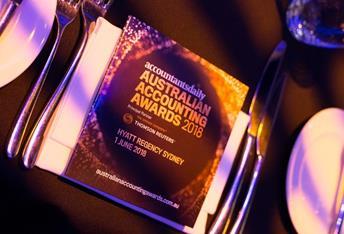 I had the pleasure of attending the 2018 Accountant’s Daily Accounting Awards at Hyatt Regency in Darling Harbour last month. BIAS was nominated for Business Advisory Firm of the Year.

This was my first time attending the Accounting Awards. My colleague had previously described them as ‘The Oscars of Accounting’. He was not wrong. The event was far more impressive than I had expected.

While my partner and I did not know anyone else on the table, we were made to feel welcome. When ‘Business Advisory Firm of the Year’ was announced and BIAS was named as a finalist, the whole table cheered. There was even an after party. Everyone talked, drank, and danced and it was very fun and inclusive.

I have long thought BIAS to be a minority in the industry as far as the way we treat each other and our clients and our general outlook and attitude. However, it was a pleasant surprise to discover I was incorrect. We are in good company.

Collins Hume won for Community Engagement Program of the Year. They provide financial and pro bono support to organisations in their local community and around the world via B1G1.

We had the honour of sitting with Chris Craggs from Argurion and his lovely wife, Melinda-Ann who also works in the business. Chris won ‘Superannuation Specialist Accountant of the Year’ and ‘Accountants Daily Excellence Award’. We were quick to decide that the Craggs were the John and Rose of WA. Chris thanked Melinda-Ann in his first speech and mentioned they were celebrating 25 years of marriage. They were seen at the after party slow dancing to nineties hip-hop. What was most impressive about Chris was his humble demeanour. His speech upon winning the Excellence Award talked about taking young accountants under your wing and being a true leader. Showing them that the industry was an exciting, growth driven and diverse place for them. He encouraged his peers to always make time for the newcomers. Chris also works with Bright Skies a non-profit enterprise assisting people with disabilities to find employment.

This is the industry in its current form. This is an industry to be proud of. The only way we can be  thought of as ‘the trusted advisor’ is for us to lead by example in an industry with exemplary peers.